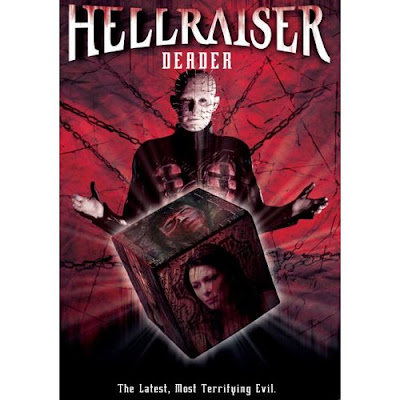 "The Latest, Most Terrifying Evil."

Synopsis taken from IMDb
A journalist uncovers an underground group who can bring back the dead and slowly becomes drawn into their world.

Let me start by saying that as of today I have only 2 more Hellraiser films to review. This brings me a lot of joy. If I were a dancing man, I'd do some crazy dance moves in celebration of ending this marathon.

the 7th installment in this series actually proved to be a  whole hell of a lot better than I expected and probably my favorite sequel in this franchise after part 2. I've been increasingly dreading these movies, so maybe I over-hyped how bad it was going to be. Or maybe this actually wasn't that bad of a movie. It's hard to tell at this point, but I'm going to let this movie slide and say it was a decent sequel just for the sake of showing you that I'm not biased in my judgement on this series.

The concept of this film was good for starters. The cult of sickos committing suicide and then being brought back to life by Winter LeMarchand, the cult leader. You knew he wasn't any good from the beginning when our lead Amy Klein (Kari Wuhrer) sees the video tape of one of his resurrections. I was really feeling the vibe of this movie and it seemed dark enough of a story to properly fit in the series. Aside from the acting being poor, the story was compelling and for the first time since Hellbound I found myself fully into the story. This felt right at home and like a Hellraiser film, not a film that was trying to be a Hellraiser film.

Amy's investigation was one that you knew she was going to become enthralled and obsessed with and she did. When you put yourself in that situation to be put in the middle of something as dark and depressing as a suicide/resurrection cult, you're bound to get dragged down into the nitty gritty. I liked the fresh approach to the series, they seemed to be back on track with this one.

I was most intrigued to see if Winter LeMarchand was Pinhead and was surprised to see that he wasn't. I fully expected him to be the lead Cenobite. However, I knew  that having the power to bring those who kill themselves back from the dead would come with a high cost. And it did. Besides, if you ask me, someone who dabbles in that crap to begin with is asking for trouble and get what they deserve. It's like playing with a Ouija board, you mess with it, you deal with it. 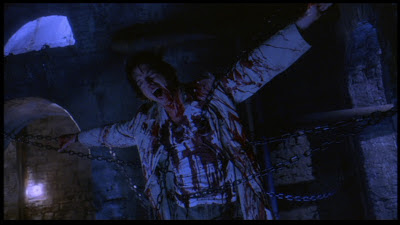 The plot develops smooth, though there is some predictability. You see some of it coming, but it wasn't as easy to guess as the last two films. Pinhead's role in this film was small, but he was used at the right parts. When he was on screen he felt imposing as he's supposed to. Honestly, I think I'm giving this movie the compliments I'm giving it due to the fact that it was a genuine Hellraiser film. And at this point I really needed that.
They attempted to get the Hellraiser train back on track with this film.

Overall, was this film perfect or have a great cast? No. This film is still very poor and not one I'd watch for a long time, but that's actually a positive thing. The last few films I never plan to watch again. This proved to be a fair sequel and I'd definitely say it belongs in this series. Though yet again the dream sequences were overused...